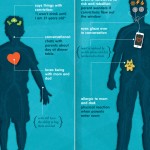 When I learned recently that 11% of 8th graders nowadays drink alcohol, I nearly fell off of my chair. Sure, I was no saint in 8th grade - I distinctly recall having to come into to school on a Saturday to pick up trash on the school grounds as a form of detention for not being where I was supposed to be during class time one day - but I definitely don't remember alcohol being … END_OF_DOCUMENT_TOKEN_TO_BE_REPLACED 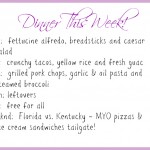 Even after having been living the States for 18 years, it never fails that, once people I meet find out from Canada, I get looks of shock and surprise, followed by the flood of well-meaning questions: No, I haven't eaten seal meat. Though some of my family members have! Yes, I speak French. Though I feel so rusty at it now and tend to default to using Spanish as a second … END_OF_DOCUMENT_TOKEN_TO_BE_REPLACED 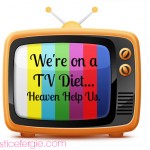 We'd gotten to a dark place, folks.  Kids glued to the television every free moment that they had. Constant fast-talking in the background provided by "Shake It Up" and loud arguments over the remote and keeping track of the day by when "Peppa Pig" came on the telly.  I'd had enough. Admittedly, we (i.e the grownups in the house) were to blame because we'd let things get … END_OF_DOCUMENT_TOKEN_TO_BE_REPLACED 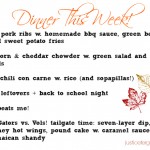 This week's menu is inspired by the crisp Fall weather the DC area is enjoying, football season and The Dinnertime Survival Cookbook that I so awesomely received in the mail as a gift from the author, Debra Ponzek.* *affiliate link  … END_OF_DOCUMENT_TOKEN_TO_BE_REPLACED