Early last year, my friend Nyasha told me that she was going to her home country of Trinidad for Carnival in 2017. It took me about 11 seconds to decide that I was going too. Playing Mas at Carnival was already on my Life List and I was turning 40 in 2017 – what better time to go? I had lived in Trinidad as a toddler and my Dad was born and raised there, so I’ve always felt a deep connection to my Trini side. I sent out an email to my closest friends inviting them to go with me and letting them know in no uncertain terms, that this trip was happening – no excuses. As it turned out, my bestest friend ended up being the only one who joined me – The Hubs. I initially was bummed but, in hindsight, the trip was exactly as it should have been. He’s my road dog, my adventure mate, my companion – and so, it was he and I that hit De Road for one of the most exhilarating trips of my life. 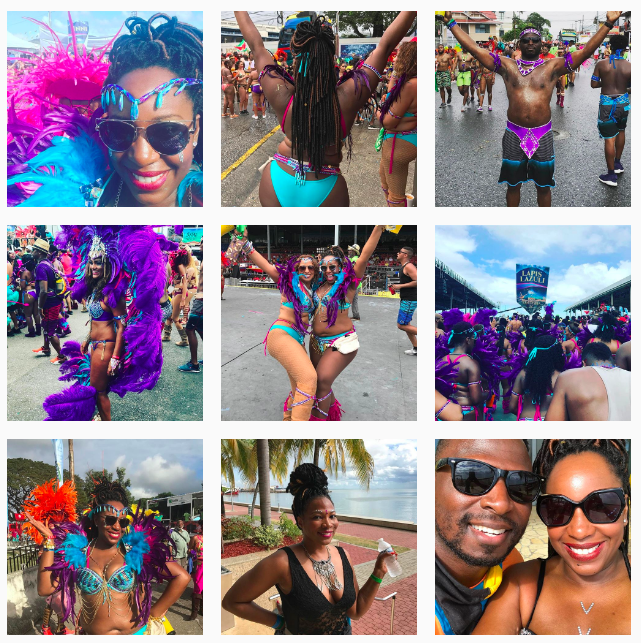 For the last two months, I’d been prepping for Carnival by listening to THE hottest Soca mix of the year – DJ Private Ryan’s Soca Starter. The day it dropped, I got about 25 messages from friends sharing the link with me. By the time we touched down in Port of Spain, I was well-versed in every single one of the road tunes for the week! My favorites are (of course) Full Extreme by The Ultimate Rejects – this was BY FAR the winner during Carnival; and Workout by Kes featuring Nailah Blackman; and Big Girl Now by Patrice Robert; and Carnival Good Morning by Peter Ram + KI The Band. I could go on – there are so many great songs. And they alllll made up the soundtrack for our trip. By the trip home, we were joking that we’d have to detox from all the Soca music – please know that it’s been 6 days since we’ve been back and we’re still sneaking on YouTube every other day to get our fix.

LISTEN. The fetes (or parties) during Carnival are no joke! Locals literally start partying after the December holidays and continue through Carnival into March. I spent several weeks lining up our fetes and purchasing tickets to all-inclusive events. There are some that are hot tickets – one of which I was able to snag – but all are big fun. Since TingZNice’s blog post about her fete experience in 2016 was so helpful to me, I wanted to pay it forward and share that our favorite fetes were Phuket All-Inclusive and Soca Brainwash Heaven. Sunny Side Up was decent, but I’m guessing ValeVibe would have been more our style. And I would definitely skip ROAST Cruise.

Whew! By the time Carnival Monday rolled around, I was nervous because I was already 75% spent and I knew I had two big days to be on the road in the parades. But because we did J’ouvert Morning [channelling the nation’s history and folklore in what was once a rebellion against slavery] with Mudders International AND HAD THE FREAKING TIME OF OUR LIVES, we didn’t get back to the hotel until about 11am (from heading out to J’ouvert around 3:30am), we were exhausted and decided to take a well-earned nap rather than meet up with our band, Fantasy for the Carnival kickoff. After we woke up around 2pm, we made ourselves head out to the parade – in part because my SIL flew in and this was going to be her only opportunity to experience Mas. After jumping with Hart’s for a bit and then watching other bands chip up de road, we walked to the Square for some…KFC (a delicacy locally because their chicken is prepared differently than in the U.S.). By Monday night, I was a wreck and we called it an early night because…CARNIVAL TUESDAY was happening in a few hours!!

Our meeting time with our band was 6:30am in full Carnival costume. We had a blast getting ready – The Hubs even oiled his chest and added glitter – and we set off in the hot sun with Nyasha for a day of wining and chippin. My most favorite part of playing Mas was when our section – Lapis Lazuli – crossed the Savannah stage. We drank and laughed and danced and ate and around 1pm, when it started to rain, an intense feeling of exhilaration came over me and I paused in the middle of de road with my arms up in the air, so very happy and free. The rain started coming down and we splintered off from the group and ate lunch at Ny’s uncle’s office where her family was gathered to watch the parade. We were back to the hotel around 4pm, ready for a rest. A delicious dinner at the Hyatt capped off our day (after we went on a mission to eat off-site but learned that the nicer restaurants are closed during Carnival time), and we were back to sleep after packing to make our 3:30am taxi to the airport. A whirlwind for sure.

Did I mention that I was ridiculously sick the entire time? Because I was. The Hubs had gotten a terrible cold the week before we left and then I caught it…The.Week.Of.Our.Trip. I literally thought it was the flu. My good friend Danielle demanded that I go to urgent care and thank God that I did – we learned that both Hubby and I had bronchitis and were prescribed meds. I spent the week in Trinidad living it up while having cold sweats, sneezing, coughing, and being congested. I made sure to take naps (which I never do). We packed our entire medicine cabinet and I probably drank way too much Day-quil and the smell of Vicks Vapo-rub, certainly betrayed the sexiness of my planned outfits. But guess what? I plowed through. And it was so worth it.

Check out my over-sharing of the trip on Instagram.